With remote workshops from the wilds of Inis Meáin to the busy suburbs of Tallaght, Studio and Outreach Producer James Bingham shares the work we've been doing with communities during lockdown. 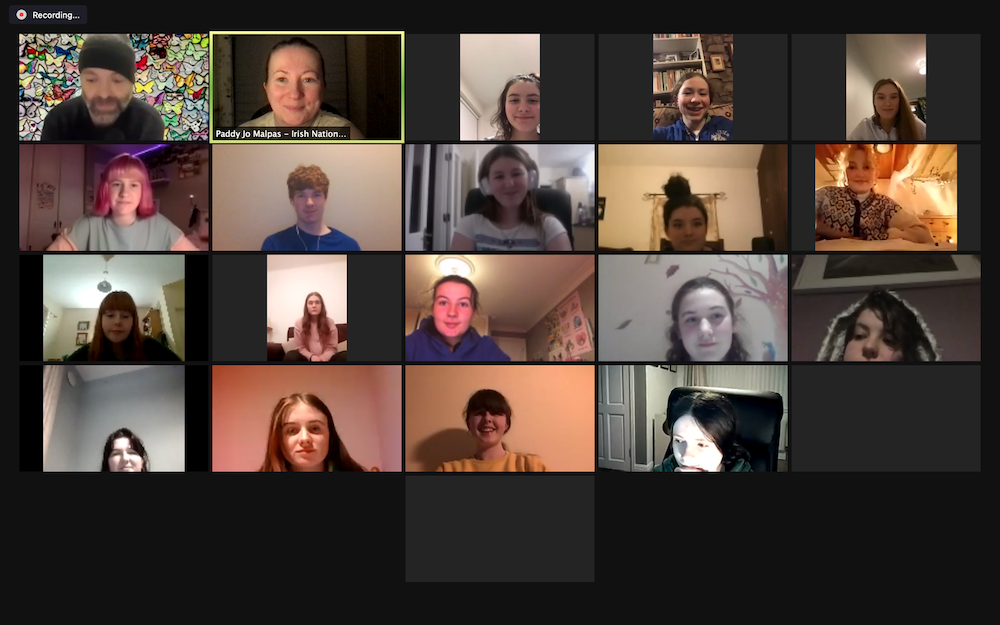 “If I wanted to do this I wouldn’t have started from here.” Irish National Opera’s Artistic Director, Fergus Sheil told the Irish Times, ahead of the launch of the company’s 20 Shots of Opera back in December 2020. The collection of new commissions for film received great reviews and reached an international audience that never would have been possible with a traditional production, but the project was delivered start to finish in a matter of months, lightning fast in the world of opera.

This quote sums up a problem that everyone in the arts is having to deal with at the moment. As circumstances shift dramatically on a daily basis, our approach to planning work has changed to withstand this. Productions need to be planned with pessimistic assumptions or with the flexibility to be realised into something radically different from what was originally planned. When we set off on a new journey, the final destination isn’t as clear cut as it once was. We have to accept we may end up somewhere completely unexpected.

When the pandemic first hit, we – like many others – did not assume these limitations would be with us a year later. We felt that our plans to develop a VR community opera as part of Traction wouldn’t be as adversely affected as our more immediate projects. Plans for meeting with the community for the first time weren’t scheduled until the end of 2020 and we were expecting to be back in theatres and socialising come Autumn. It made sense to press on with plan A and ride this out. As cases continued to rise however, it became clear that any assumption of in-person activity happening for the foreseeable future carried with it too big a risk of cancellations. We had to re-think our approach to working with communities.

Community opera is a process that already deals with an amount of uncertainty. Handing power to members of the community to make decisions on how the opera should look, sound and feel is fundamental to the process. Therefore, community opera in a pandemic carries with it even more complexities in uncertainty than an entirely professional piece typically would. To ignore these ever-shifting sands and simply hope the project would come together would have been a state of denial. Therefore, the solution was to lean into this uncertainty and create a process that was small-scale and dealt in the short-term.

In January 2021, we began recruitment for a host of free online workshops with a variety of different artists in different disciplines, each open to a particular community that we were interested in working with. Whilst the content of these workshops has varied wildly, the structure and brief to artists has been almost identical: facilitate four online 90-minute workshop with a maximum of 20 participants taking part. By the end of a series, participants should have produced at least some small artistic output relevant to the workshop’s particular area of focus.

We began in February with writers Dave Lordan and Darach Mac Con Iomaire, working with secondary school students in rural areas and residents of the Inis Meáin, part of the Arran Islands, respectively, to produce short pieces of writing. Simultaneously, contemporary visual artist, Shane Sutton, worked with residents of Tallaght and South Dublin to produce digital visual works. The relationship with the three communities continued into March with workshops led by the visual artist and contemporary vocalist Ceara Conway. The community opera’s composer, Finola Merivale, will be running sessions in April on composition. Participants are free to take part in all the workshops in their area or sign up for the session that interests them in particular, but the maximum commitment at any given moment is only four 90-minute sessions on Zoom. By the end of April, we expect to have worked with over 60-70 individuals from a variety of backgrounds, all producing pieces of art in different shapes and sizes. Our challenge going forward is to find a way to distil this work into a cohesive experience that makes sense in a VR headset.

Working in this short-term way, whilst somewhat disconcerting from a production point of view, has been an interesting revelation. It’s instinctual as a project manager or producer to plan well in advance, but for community opera such an instinct might not always be best practice. Long term planning certainly gives us at INO peace of mind to decide how and when we work with communities, but for us to truly engage with the community, we must be responsive and involve them in the decision-making process at every stage of the project. Members of the community may not know yet if they feel comfortable taking part in this project in the long term, they need time to get to know us and the project and see if it’s for them. This relationship is inherently short-term, and much like a romantic relationship, it is hoped that a trust is developed so longer-term decisions can eventually be realised.

Opera is an art form that is still dogged with the stereotype of being stuck in the past. Maybe this is because opera companies are often too beholden in the present to decisions made in the past. Perhaps if we, as producers, are more comfortable with not knowing what’s next, we might then have the space to listen to our communities.