One of the world’s best-known and most-loved operas, Bizet’s Carmen is a regular fixture on opera house stages the world over. But what makes it so popular? Read on and find out.

It’s Got The Hits

Even if you’ve never been to the opera before, Carmen is filled with tunes you’ll recognise. From the provocative Habanera sung by Carmen to the Toreador song sung by the bullfighter Escamillo, there’s plenty of hits to sing along to.

Listen to the Habanera

Love, jealousy, passion, rage, the themes in Carmen could be picked out of any blockbuster movie in the cinema today. But, at the heart of the story is the struggle of one woman to move beyond the bounds that society has placed around her and live life on her own terms. Carmen refuses to be defined by her status as a working class gypsy woman (a triple whammy of marginalisation), and to that end, asserts control where she can, by using her sexuality and intoxicating personality, to manipulate the men she meets into serving her needs.

Originally set in southern Spain, Carmen represents all that is exotic, different and exciting. You can imagine the heat and humidity stifling the workers as they toil in the cigarette factory where Carmen opens. In order to give an authentic Spanish feel, Bizet, who never visited Spain, imbued the score with traditional Spanish folk music. In fact, Bizet based the famous Habanera from Carmen on El Arreglito by Sebastián Iradier, after mistaking it for a traditional folk song. Thankfully he realised his mistake and credited the composer in the vocal score thereafter.

After its premiere in 1875, one critic wrote that Carmen was 'the very incarnation of vice'. During the opera, the singer who played Carmen scandalised audiences by smoking on stage – an activity that at the time was the reserve of men or women of ill-repute. Carmen represents danger for the male elite. She is ‘un-controllable’, ‘unladylike’, ‘un-predictable’. She exudes confidence and doesn’t care what those around her think. Not used to portrayals of ordinary people on the stage of the opera house, the proposition proved too much to bear for the conservative audiences of the 19th Century and the opera was poorly received. 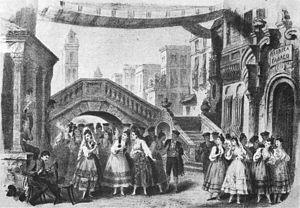 Lithograph of act 1 in the premiere performance, by Pierre-Auguste Lamy, 1875

Opera is not known for being kind to its heroines, and (spoiler alert) Carmen’s fate sadly follows this operatic tradition. But it’s clear that Carmen represents a feminist icon, refusing to be controlled by the male structures that dominate her life, choosing freedom in death instead. She repeatedly demonstrates her ability to fight back against the patriarchal society in which she lives and shows grit and determination, even in the face of death. One modern production even goes so far as to alter the ending of Carmen, saving her from her fate and the violence of Don José, asking the question, if Carmen was a heroine of today, how would her story end?