Set and costume designer Nicky Shaw is responsible for creating the fairy tale world in which we find our Cinderella. No mean feat. We caught up with her to see how she brings the fairy tale to life.

How did you get involved in costume design for opera?

I trained at Art College in Theatre Set & Costume Design, after which I served a long apprenticeship as an assistant designer, working in the studios of several very successful designers, until I finally started my own career. I worked on many small scale productions, but got my ‘big break’ as a costume designer on an opera production at La Monnaie in Brussels.

What is your favourite thing about working in opera?

There is often more possibility to be abstract in opera set design than in theatre, and if the opera has a chorus there are 10s more costumes to design than there would be in the average play.

It is a privilege to listen to a piece in my studio for months on end really getting to know the piece, but then, best of all, to work with talented singers and musicians hearing the opera sung live both in the rehearsal room and on-stage prior to the opening performance.

What are the biggest challenges in designing costumes for opera?

Probably that of budget. As there can often be 10s of costumes to produce, finding a balance between costume makes and costume hires can be challenging as you might not find what you were looking for. However, there is enjoyment to be had from staying open minded whilst pulling hire costumes and finding an unexpected piece, or putting together difference hire pieces, thus making a new costume.

Where do you look for inspiration in your work? What inspired the your costume designs in this production of Cinderella?

I have a large collection of books in my studio covering historic costume to modern fashions, books of famous painter's and sculptor's work, as-well-as books on architecture and on nature. When listening to a piece, the memory of a painting may come to mind, or a shape; sometimes even from dreams.

The costumes of the main characters in this production are historical costumes from the 18th century. One of my first points of reference for this production was Edmund Dulac’s illustrations of fairy tales, where many of his illustrations show characters in mid 18th century costume, along with a revisit to my own childhood ladybird book of Cinderella.

You also designed the set for Cinderella, which comes first, set or costume design, or are the two inextricably linked?

Usually the set comes first, as I am designing the ‘world’ the characters will inhabit, but the director Orpha and I settled on a world of books early on, so I was looking at illustrations of fairy tales for both sets and costumes. In this production sets & costumes were linked, but this is not always the case. Sometimes the set can be completely abstract and it is only the costumes that inform the audience what period it is in.

"I was thrilled to find an antique quilt on ebay which we used to make the Cinderella Rags skirt, making a beautiful patchwork effect; this would have been far to expensive to achieve otherwise and it meant the skirt required little breaking down to look old and broken." 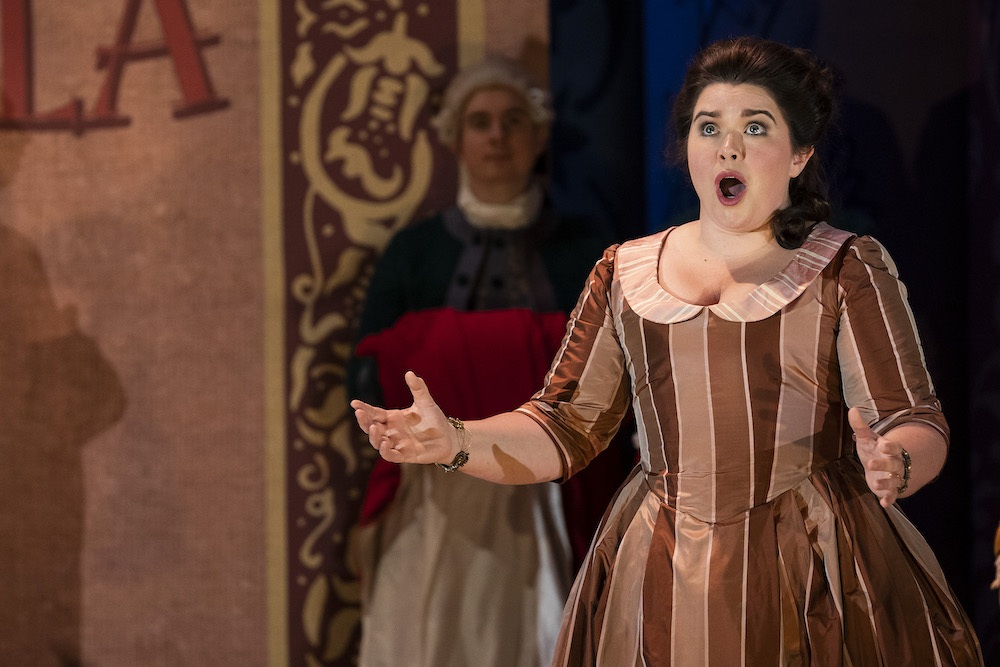 "My most favourite of Cinderella's costumes was her final dress for the Act 2 finale where I was able to find a striped fabric the exact tones of the giant Cinderella Book onstage. This dress is 1950s in flavour, but could also be contemporary. Our idea was that Cinderella is like us, someone reading many stories to inform her own life, and finding comfort and solace in them from her unhappy life" 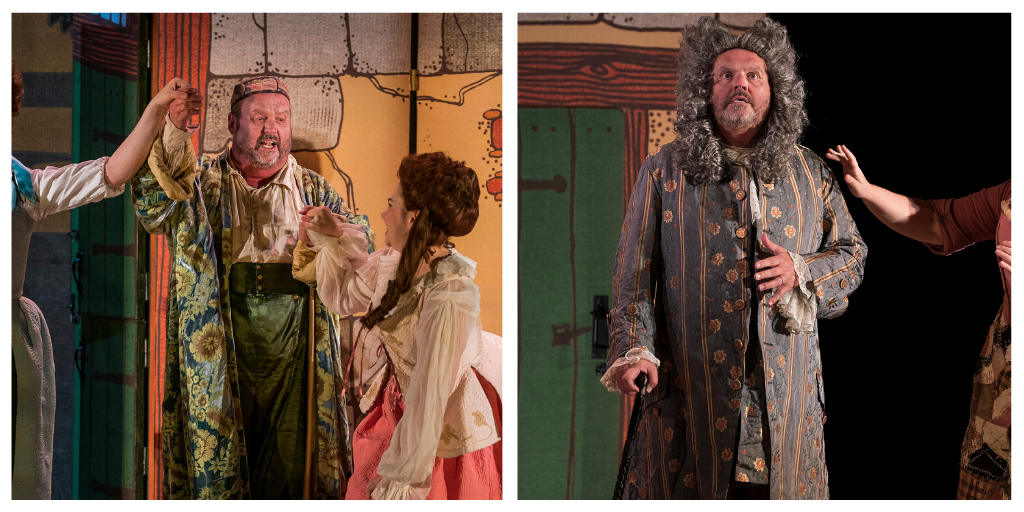 "Magnifico is a cruel person to Cinderella in the opera and he is poor, having spent all his money.

We first see him in his ‘at home’ clothes; we hired these costumes and I was pleased to find a beautiful, but old and worn green based velvet devore print house coat. Then we found green breeches to match and and old shirt, finished off with a house cap.

I wasn’t sure what colour I wanted him to be in for his main 3-piece costume until I was looking for fabrics: it is a very colourful show both with the set & with nearly all the costumes, so when I saw a grey silk fabric it seemed right for him to be neutral in tone, whilst still having a patterned fabric."