Paula Murrihy: ‘You’ve got to find and follow your road’

Irish mezzo-soprano on her unusual route into a singing career and her upcoming role as Judith, the fourth wife of Bluebeard

Mezzo-soprano Paula Murrihy’s journey from Kerry to the stages of the Metropolitan Opera in New York and the Salzburg Festival, not to mention her regular appearances with Teodor Currentzis’s cutting-edge Musica Aeterna, began at Siamsa Tíre in Tralee.

She comes from a background where traditional Irish music was the family passion. And that’s where her own early musical interests lay. She enjoyed singing and kept getting compliments on her voice. Those pleasures eventually became a spur to do something more and make the most of the gift that she had. But music as a career was not really in her sights – just the idea of developing and improving her voice, because singing was something she loved.

Then she found herself making a leap into the dark. Although music and singing were a rewarding part of her life, she was planning a career as a primary school teacher. Everything seemed good to go when she got the results she needed in the Leaving Cert.

She was at home with her sisters one day that her parents were away, and realised it was the last day for making changes to CAO applications, the last day she could steer a course away from teaching and towards music. The pull proved to be too strong. She registered her new choice with the CAO and rang her father to tell him. He took a breath and just said, “I’ll put you on to your mother”. The die was cast.

She studied for a performing degree at the DIT Conservatory of Music and Drama, finding herself “singing every single day”, which she relished. It was in Dublin that she went to her first opera (Puccini’s La bohème in Opera Ireland’s 1996 production). By the time she graduated from the conservatory she had no real notion of how she would make a living, or what type of career her training might have prepared her for. She is far from unique among graduate music performers in that regard.

She describes her first professional engagement, in Belfast’s beautiful ClonardMonastery for a Mozart Requiem with the Ulster Orchestra, as a revelation. The performance was given during the time of the peace process and the great and the good of Northern Ireland politics were seated in the front row. She was in awe of the fact that she was working on the same level as seasoned professionals, and singing for an audience that included people she would have known only from news reports. And then, like one of the Little Matchstick Girl’s matches, the vision disappeared. She found herself alone, back in her room at the Europa Hotel, before wandering down to the Mace on the opposite side of the street to buy something to eat. In just a single engagement she experienced both the bright lights and the loneliness of the performer’s lot.

When she talks about the way her career developed she sounds modest, even self-effacing. She’s not someone who has ever been shy of hard work. Her focus is always on doing the best she possibly can. She says she owes a lot to having grown up in nurturing family and says she wouldn’t be where she is without the support of her husband, Eamonn Bonner (the two met as singers in the DIT).

Luck, of course, is an element of any success story. She was encouraged in what sounds like an almost casual way to apply for a course run by the William Walton Foundation on the island of Ischia in the Bay of Naples. She turned up early for the audition and, because of gaps in the schedule, was asked if she would like to jump the queue and sing rather than wait. So that’s what she did.

At Ischia she worked with the director Colin Graham, a close colleague of the composer Benjamin Britten, and the conductor Stephen Lord. It turned out to be a life-changing experience. Her new mentors steered her in the direction of the US, and it was because of their advice that she chose to continue her studies at Boston’s New England Conservatory of Music.

America’s high-powered music schools are a daunting environment. It’s not just that the standards are high. The competition is also fierce. She seems to have thrived in exactly the same way that she survives in the highly-charged world of leading international opera houses.

“You’ve got to find and follow your road,” she says. “You can’t spend your time looking over your shoulder.” Her husband, she explains, likes to make a comparison with athletes in a race, when they’re all lined up for the start. They’re in a staggered row, and no one knows exactly who is where until they all merge in the final straight. Her concern is to focus on what she has to do, and not allow herself to be distracted by what anyone else is doing around her.

The role of Judith

The precision of her personal focus becomes clear when she talks about preparing for the role of Judith in Bartók’s Bluebeard’s Castle. Like many singers she begins her preparation with the words, which are often more tangible than the music.

There was, she says, some discussion of performing the opera in English, but she’s glad that they went with the original Hungarian. The production is directed by Enda Walsh, who has also provided a new translation for the surtitles. 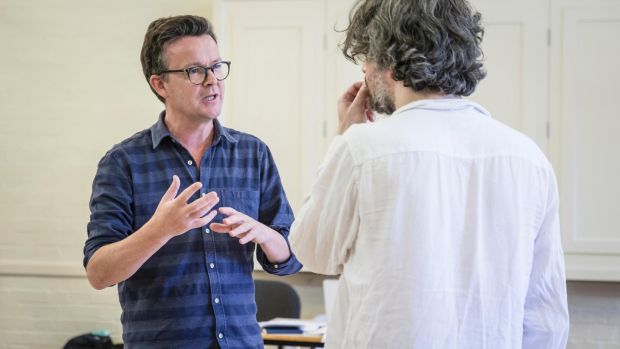 While working at the Salzburg Festival last summer she heard of a coach who has helped a lot of singers in Vienna when they perform in Hungarian. So she arranged to work with him, took the train to Budapest, and found herself being tutored in his family home, with the benefit of home-cooked Hungarian lunches on the side. It’s a fair indication of the extra mile she chooses to go in the pursuit of her goals.

The readiness she seeks to achieve for the start of the rehearsal process has to be an open readiness. A rich vision but one without preconceptions is what she aims for. Bartók’s sole opera, to a libretto by Béla Balász, is an expressionist treatment of the tale of the wife-murdering Bluebeard, of which the most famous version is by Charles Perrault.

Murrihy sees Judith, the fourth wife, as something of an adventurer, a brave woman who enters Bluebeard’s life with her eyes open, believing that, in spite of all the rumours she has heard, she will know how to handle him. It’s hard not to relate that view of a confident Judith with her own confidence as a performer in a profession which, she disarmingly says, she still doesn’t fully understand. Her focus is much more on where she’s going than on where she has been.

When I ask about the most difficult challenges she faces as a singer she talks about the way her voice changes. It’s a physical matter, not just of the kinds of differences we can all experience from day to day, but shifts that become manifest over longer periods of time. It means that when she comes back to a role she doesn’t expect anything like a simple repeat. Even to get the same sounds, the same vocal effects, always requires a different approach. That has all to be dealt with before she comes to any new perspective she might have on the role itself.

She is challenged by the amount of travel that’s involved, though some of the sting is removed by the fact that she insists on travelling with her husband and daughter, a luxury that not many performers manage to achieve.

She wishes she didn’t have to take so much care over her health. She had to cancel a long-planned meeting with friends because one of them had an infection. It was not just that she didn’t want to risk catching the infection herself, but also that she couldn’t risk the possibility of introducing an infection into the group of colleagues in rehearsal. An important reunion had to be sacrificed.

Sometimes, she says, she feels as if her head and memory are full, so full that she almost can’t imagine learning another role. The things you can be sure her head is full of now, beyond Bluebeard’s Castle, are Strauss’s Ariadne auf Naxos (for Oper Frankfurt in November), the songs of Mahler’s Des Knaben Wunderhorn (with Teodor Currentzis in Milan, Munich and Budapest in December) and Mozart’s La clemenza di Tito (for the Metropolitan Opera in New York in March).