Building Enda Walsh’s world: ‘I like the danger of having a blank piece of paper’

Shortly after Grief Is the Thing With Feathers premiered, a crow moved in across the way from Jamie Vartan’s London house. “We could see him drinking from the neighbour’s gutter,” says Vartan, the award-winning designer, whose electrifying set, together with writer and director Enda Walshand actor Cillian Murphy, made Grief such an unforgettable, kill-to-get-a-ticket experience.

The play, based on a novel by Max Porter, deals with the surreal aftermath of a sudden death. Two young boys have lost their mother. The husband, bereft, finds his mind and his life occupied by a huge and angry crow, which threatens to stay for as long as the family needs him. Vartan’s set showed the interior of the family apartment, the walls of which became screens for stories, memories and the wild imaginings of the father character and, of course, the crow. It was a dark, intense experience, by turns nerve-racking and unexpectedly uplifting.

How, I wonder, do you bring the space for drama to take place out of the furniture of your own mind? Vartan, who works from a small studio, once a garage, at the end of his garden, in the south London suburb of Brockley, initially studied fine art before going on to theatre design at St Martin’s college. The problem with fine art, he tells me, was the question of what to make: “There were so many billions and trillions of things, I was pretty mind-blown. I was really excited but didn’t know where to start. I couldn’t narrow myself down.” 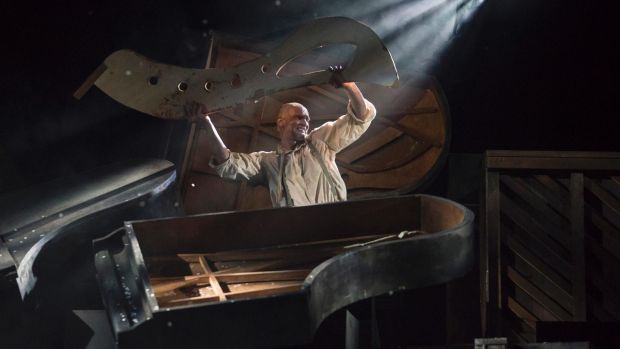 With theatre there’s no such problem. Instead you’re working with a group, which Vartan finds exciting, figuring out how to meld the needs of the script, director, audience and actors, and in so doing create something that makes theatrical magic.

As we speak, a trio of trailers made of white foam board sit on a mini stage, constructed from stark black card. It’s a thrilling set-up for Ariadne auf Naxos, an opera coming to La Scala, Milan, next year. The trailers, which seem pretty intricate to me, aren’t finished yet. Vartan will go on to make exact replicas of the real thing once the design is approved. 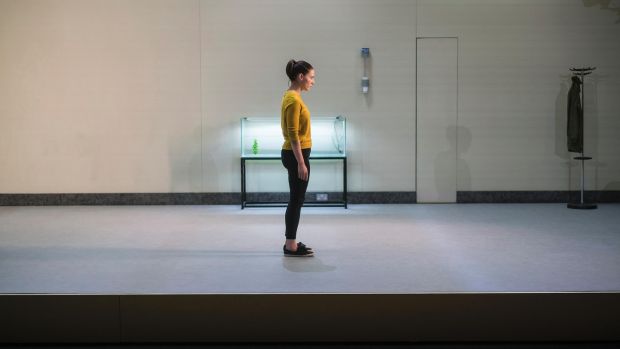 The tools of Vartan’s trade: foam board, small wooden batons, sketchbooks and reference books, are neatly stacked, and on shelves are more models, finished ones this time, for previous acclaimed productions such as Misterman, Arlington and more.

There are music CDs, light boxes and production photographs ranged on the shelves and leaning up against the walls. The overall impression is of a highly creative mind, kept in order by precision. 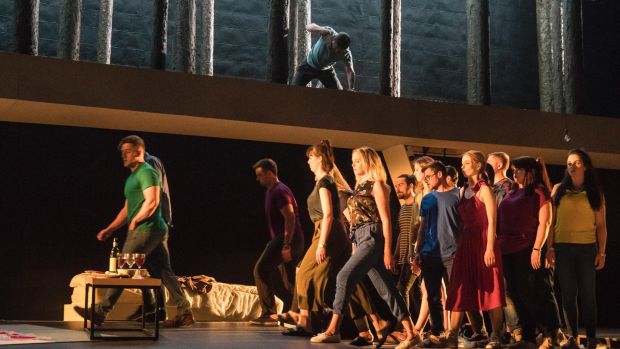 The sketchbooks are fascinating. From a page of crow-like figures, showing the progression of ideas as a man-like crow becomes full bird (or vice versa), to swathes of black ink conjuring a dark presence in flight, to the sketch of an almost fully realised set, it’s possible to see how deeply Vartan researches his subjects.

“The neighbours hadn’t cleared their gutters,” he says, going back to his visitor. “So the crow arrived to drink. But it was when he started tapping at the window…” he pauses, smiling at the coincidence, or wry irony, of being stalked by a crow so soon after being so immersed in their own darkly feathered world. 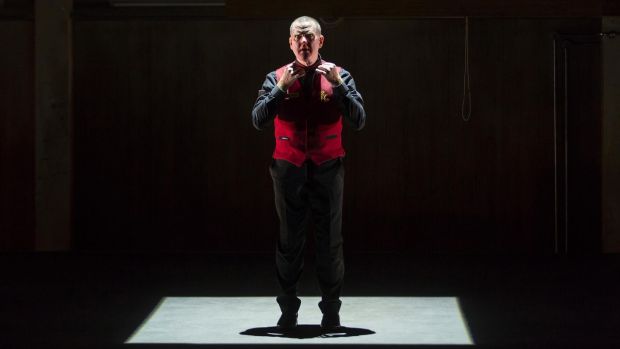 Vartan began to work in Ireland when he met Brian Brady, who had been a director at the Abbey. Through the Abbey he met Niall Henry from Sligo’s Blue Raincoat, which led to unforgettable sets for productions including their The Third Policeman in 2007. “Flann O’Brien really blew things apart, the way he wrote, didn’t he?” says Vartan.

Vartan smiles frequently, sometimes conspiratorially, and often with a wry sense of self-deprecation. He speaks slowly, thinking thoroughly about questions before coming up with his answers. He has a dark side, he acknowledges. But he also has a sense of fun, describing how in the early days of setting up his studio in the garden, he would look out the window and see his young son, waving cheerfully from his bedroom, as he tried to immerse himself in variously troubled imaginary worlds. 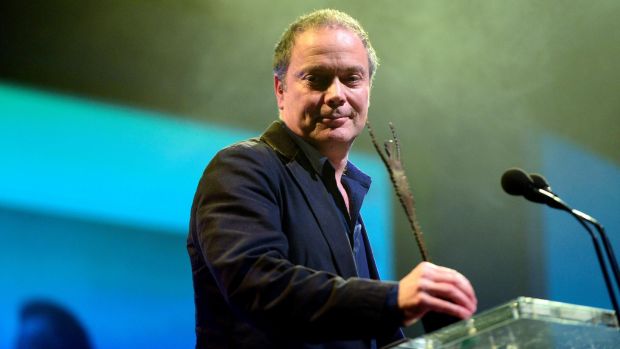 This is part of what drew playwright and director Enda Walsh to him, and initiated an incredibly successful series of collaborations.

“I actually interviewed him,” Walsh says, seeming almost astonished that he would have done such a thing with such an extraordinary designer. “It was for the first one, Misterman. I don’t know why, but I immediately liked him. He’s very thoughtful, very quiet. I really liked that. He had a completely different way of thinking and talking, and the pace of his personality was completely different from mine. I instinctively knew I could talk through things, and he’d be able to articulate it.”

The collaborations have continued, although Vartan insists that you have to forget everything you thought you knew each time, or “you don’t get the buzz. I quite like the danger, the excitement of having a blank piece of paper,” he says. 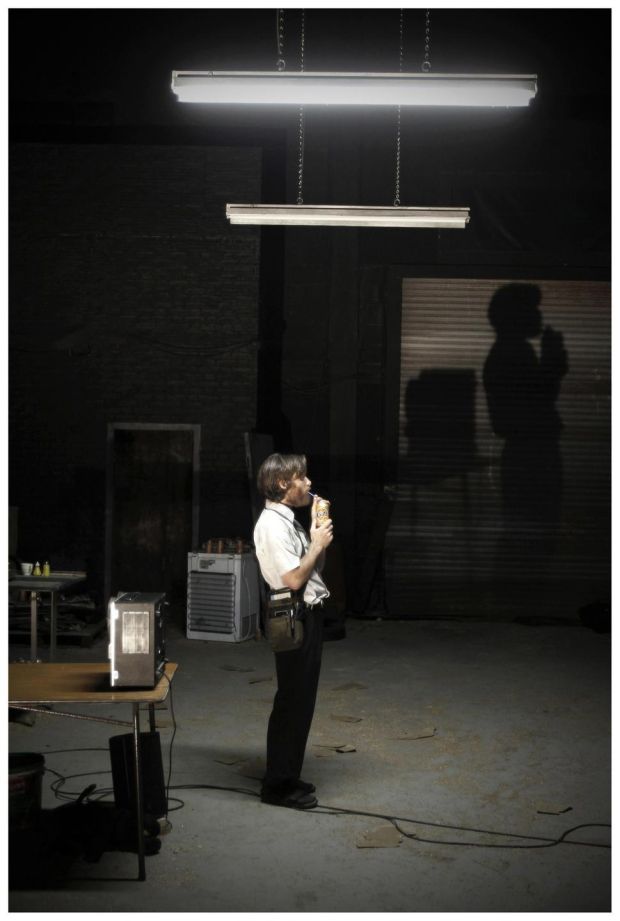 Now the pair are working on the Irish National Opera production of Bluebeard’s Castle for the Dublin Theatre Festival. Vartan generously shows me his work in progress, unabashed by the fact that it’s not yet complete, unlike some artists and designers. The opera, by Hungarian composer Béla Bartók, is a dark tale of a newly married couple. She wants them to have no secrets and insists he open the doors of his castle, desiring to know everything about him. You can guess the rest.

As we talk, Vartan’s absolute love of theatre, its actors, characters, theatres and contexts is inescapable. His attention to detail, and memories of scripts, stages, plays and the stories attaching to them, make him utterly fascinating. He describes working with Walsh, and the team, which he’s quick to credit, including trips to the pub “with the intention that the penny’s going to drop, and someone might say something and a big decision will be made. It’s a really fascinating way of working. With some other directors you’re almost given a thesis to read on their thoughts, with links to go to, books to read. With Enda, he’ll drop a few lines of gold dust, which are gems. The rehearsal period is very exciting,” he adds. 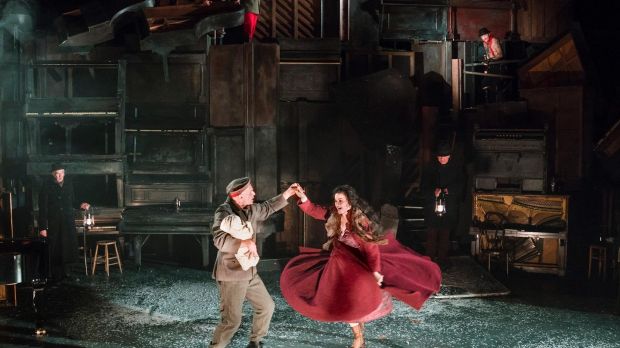 “It’s like watching this horror movie appear in front of you,” says Walsh gleefully of Bluebeard. “I love it, it’s terrifying. We started talking about [the Syrian president] Bashar al-Assad. We’re not going to chase that down, but it’s a starting point. Jamie started with this huge piece of white marble, surrounded by rubble, this sofa, this really nice drinks trolley … It’s incongruous but completely right. It feels like a really dangerous stage for these singers to sing on.”

Vartan picks up the tread, describing how Assad had an almost banal background, studying ophthalmology, despite being a son of the Syrian president. “And then he’s responsible for all this brutality,” he says wonderingly. “It’s that feeling of his palace, a massive marble fortress, a very cold, impenetrable place – but who knows what’s down the corridors?” 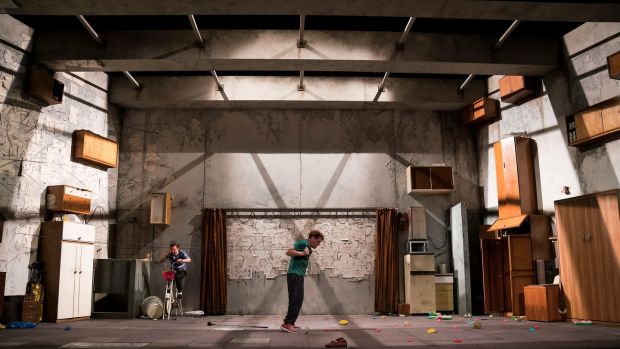 He shows me another mini stage, made from more black card, framing a space behind which are two white foam board uprights – Walsh’s “white marble”. Two tiny sofas sit among gravel, doubling up as rubble. It’s important to get both sofa and rubble right. There are small figures to represent the actors. Vartan works with model maker Jo Lakin, and pulls out little sachets of different kinds of gravel, clearly delighted by their possibilities.

“There’s this horrible feeling of power and drink. They have to be off their heads to do what they do,” he says, warming to his theme. Destruction follows.

“You do trash sets,” I say, thinking of Ballyturk.

“I do,” he smiles, though that is also the creative company he keeps.

More troubling to him is when he reads a script, and thinks it simply doesn’t work. “I’ve been lucky enough with Enda that that doesn’t happen,” he diplomatically insists.

What is it about Vartan? I ask Walsh. He casts his mind back to that first collaboration, Misterman: “As audience member, you know it’s a set. But you feel it too. And yes,” he adds, “he’s a brilliant designer.”

Bluebeard’s Castle is at the Gaiety Theatre for the Dublin Theatre Festival from October 12 th to 14th. dublintheatrefestival.com

Misterman in 2011 was the first time Vartan worked with Enda Walsh, Cillian Murphy and lighting designer Adam Silverman for the Landmark Productions/GIAF play, which explored the hell that can be created within a single man’s mind.

Ballyturk: Working with Walsh in 2014, on the set for a play that Walsh said should “bypass the intellect and go straight to the bones”. Cillian Murphy, Mikel Murfi and Stephen Rea starred in the Landmark Productions/GIAF winner of Best Production in the 2015 Irish Times Irish Theatre Awards.

The Second Violinist: in 2017 with Walsh and composer Donnacha Dennehy, reuniting the team who had worked so brilliantly together on the 2015 opera The Last Hotel. A combination of orchestra pit, dishevelled bedroom, vast projection screens and an elevated forest made the ideal setting for Wide Open Opera/Landmark’s exploration of a tortured creative mind in our media-saturated age.

Woyzeck in Winter: in 2017 Vartan’s set of huge heaps of dilapidated pianos was the star of the show in Conall Morrison’s adaptation of Georg Büchner’s 1836 play set to Franz Schubert’s haunting Winterreise song cycle.